Diabetes education provides support for the diabetes patient so that he is empowered to take full charge in the management of his condition.

The very basis of successful diabetes education, in this sense, is in the partnership between the patient and the medical care team, which enables them to keep taking steps forward toward shared goals.

Path Leading To The Present

The patient’s capacity for self management and discipline is a crucial part of success in diabetes treatment. Needless to say, providing optimal patient education plays an important role in maximizing the patient’s potential for self realization. This belief prompted Dr. Yamada to start diabetes classes for the patients, where they could learn about diabetes and eventually, form a patient association, through which patients could befriend each other.

A visit to the Joslin Diabetes Center in the United States, touted as the Mecca of diabetes treatment, in 1999 was an inspiration to Dr. Yamada. He saw that even though they provided only outpatient treatment, they had a comprehensive diabetes education curriculum in place, designed to draw out the maximum potential of each patient. When he returned from this visit, he started to work on his own diabetes education program. 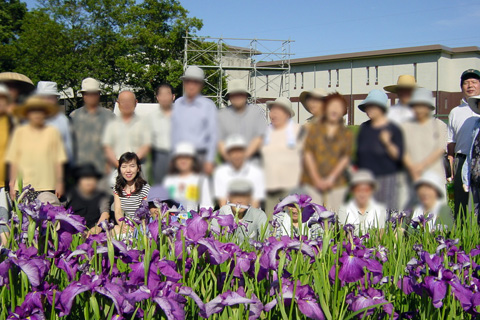 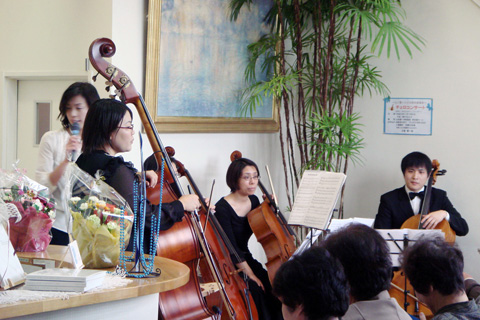 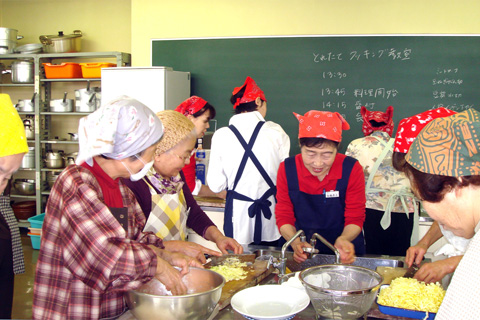 At the suggestion of Dr. Masakazu Hattori (then associate professor at Harvard University Medical School), befriended by Dr. Yamada during his visit to the Joslin Diabetes Center, USA – Japan Meeting On Diabetes Education, which would allow participants from the Joslin Diabetes Center and Japanese medical professionals to work together on diabetes education was launched. Dr. Yamada acted as one of the original managing directors of this joint project. The USA – Japan Meeting On Diabetes Education provided him and his wife Itsuko with a platform where they made presentations on clinical findings and diabetes education from 2002 through 2012.

In 2006, Dr. and Mrs. Yamada took part in the US Diabetes Conversation Maps Workshop during the American Diabetes Association’s annual convention.

They learned that the ADA was not considering developing a Japanese version of the maps and, encouraged by their Joslin colleagues, they decided to create their own diabetes conversation map, initially launched as the Conversation Luncheon Map (see : Development And Applications Of The Diabetes Dialogue Map). 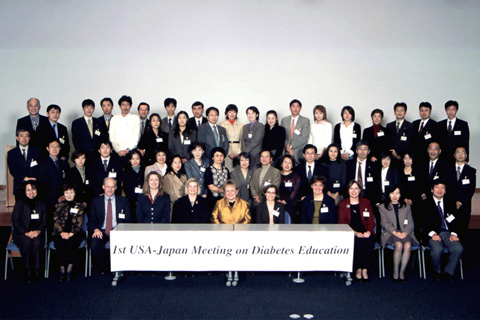 The creation of Dr. and Mrs. Yamada's own diabetes dialogue map would drastically change their approach to diabetes education.

It opened everyone’s eyes to the essential joys of teamwork with each and every staff member fully participating in the creation of the map and other educational tools.

In 2006, Dr. and Mrs. Yamada had an opportunity to give a presentation entitled “Outpatient Diabetes Education – the developing vision of a small clinic” at a conference hosted by the TPE (Therapeutic Patient Education) in Florence, Italy. 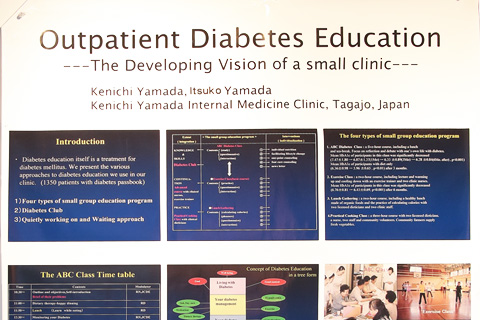 Their presentation was favorably received and this success led to a poster presentation at the International Diabetes Federation Congress held in Cape Town, South Africa in December 2006 through encouragement extended by Prof. Francois Bonnici, then chairman of the South African chapter of the IDF.

During a visit to Budapest, where they gave a presentation at the Therapeutic Patient Education Congress in 2008, Dr. and Mrs. Yamada embarked upon a series of discussions with Dr. Jean-Philippe Assal (former Committee Chairman of the WHO chronic disease prevention committee and chairman of the European Diabetes Congress Patient Education Department) on methodology in relation to the diabetes dialogue maps, which continues to this day.

Dr. and Mrs. Yamada were invited as poster presenters for “The Creation and Evolution of Diabetes Conversation Luncheon Map Including the Intervention of Recognition Disorder” at the IDF Congress held in Montréal in 2009. 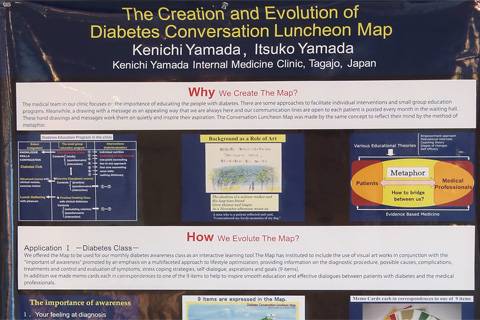 The working relationship with Dr. Assal thrived through Skype™ discussions, and Dr. and Mrs. Yamada participated in diabetes dialogue map workshops held in Geneva and Grimentz, Switzerland at the invitation of Dr. Assal’s research institution.

The participants in the workshop sessions included patients, medical professionals, artists and educators who engaged in in-depth discussions on the characteristics of the dialogue map, its use with patients having various cultural backgrounds, artistic aspects and methodologies. 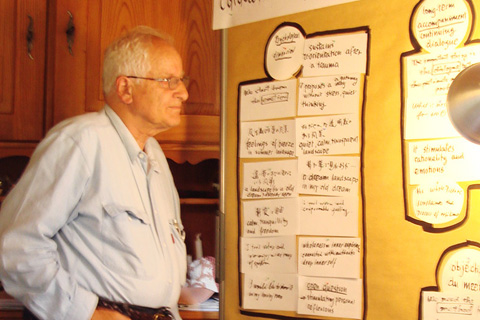 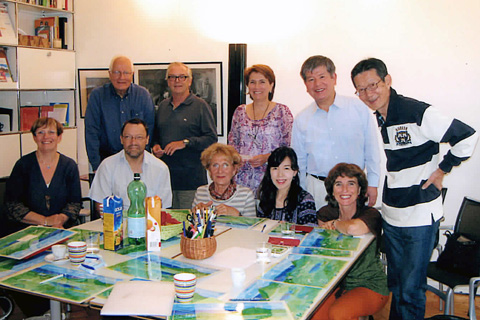 At Dr. Assal’s urging, who thought an optimal diabetes education methodology may be cultivated through combined use of the diabetes dialogue map and PRISM, Dr. Stefan Buchi, a professor at Zürich University, who developed PRISM, gave a series of training sessions in 2012. The participants included Dr. Jean-Philippe Assal , Silvia Ciaccio, Tiziana Assal and Itsuko Yamada (see : PRISM). 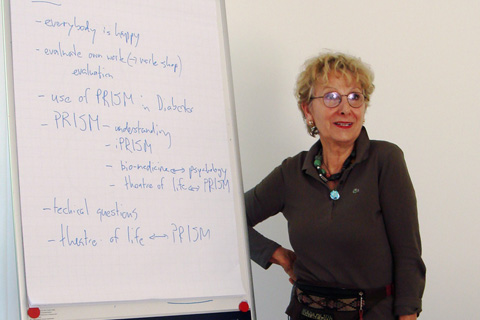 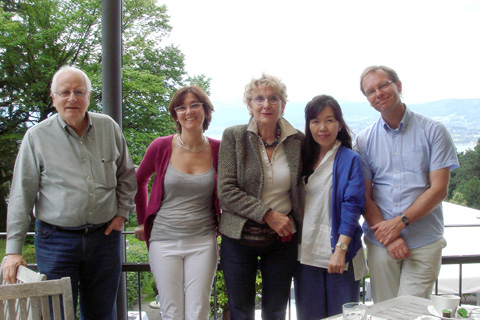 While the diabetes dialogue map and PRISM are both visual educational tools and have certain similarities, they are significantly different from each other. It was learned that through the combined use of these two tools, the patient was able to achieve clearer recognition of his condition, leading to an outcome that could be better substantiated scientifically.

Dr. and Mrs. Yamada continue to enjoy successful partnerships with and advice from Dr. Buchi and Dr. Assal and have been collecting more clinical data and patient narratives, which has allowed them to compile presentation data for a number of diabetes congresses. 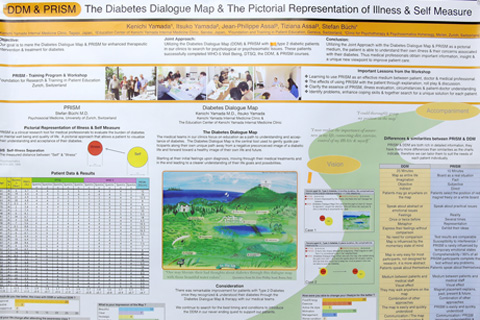 In addition to diabetes education, Dr. and Mrs. Yamada have been active in compiling presentation data on clinical tests and nutrition education for diabetes conferences. Needless to say, their main focus has always been actual treatment of diabetes and day-to-day working relationships with patients.

Kenichi Yamada Internal Medicine Clinic and the Education Center continue on this journey of thinking and taking steps hand-in-hand with patients.